Tales of the Collaborative Journey…

With help from a grant from the Ontario Ministry of Training, Colleges, and Universities I was able to dedicate a large portion of my summer working on this super cool project, led by Dr. David Fancy from Brock University’s Dramatic Arts department and logistically managed by my Centre for Pedagogical Innovation colleague, Matt Clare. 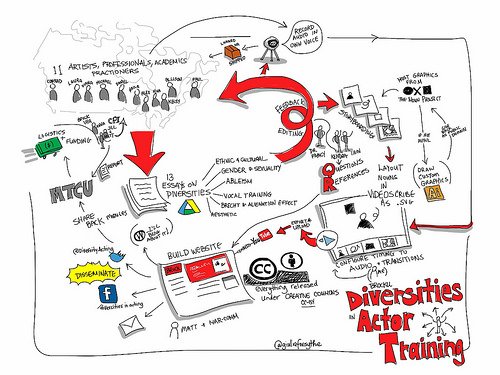 flickr photo shared by giulia.forsythe under a Creative Commons ( BY ) license

I mapped out the workflow of this collaborative project because it was one of the most impressively coordinated team-based projects I’ve worked on. With so many moving parts, I was very pleased with the level of professionalism and dedication on behalf of all those involved.

There are 11 artists and thinkers from across Canada who wrote 13 essays on diversities in acting training.

“this video series focusses on how unjust ways of storytelling can be dealt with in part by approaching acting training with an awareness of diversities. We pluralize the term ‘diversities’ because there are so many types of difference (in fact everything is difference … but that’s a longer conversation). We’ve focussed on a few key diversities. We’ve stressed how diversities intersect.”

The essays were shared via Google docs with David and the research assistants, Kendra Neaves and Iain Lidstone, both recent Brocku Dramatic Arts graduates. After feedback and editing, the authors read their essays aloud into snowball microphones provided to them. They then shared the digital recordings with us, ideally via our shared folder but also through whatever means best suited them: email, dropbox, etc. Most audio editing was done by the research assistants and final files were shared back the shared folder as well.

From the essays, the research assistants created storyboards capturing the gist of the main ideas, paying careful attention to not reinforce or reify stereotypes in an effort to explain the harm they can do. This meant keeping imagery symbolic and not too literal, especially when dealing with sensitive topics like blackface or gender reassignment. [Side note: the featured image is one of my favourite stills the series where Alex Tigcheleaar describes how she avoids the clichéd use of the “Paraprosdokian Device”. (Don’t know what that is? Go watch her visual essay, Diversities in gender and sexuality IV: Queer and trans performance strategies in contemporary Canadian theatre and performance).]

Fairly early in the storyboarding process it occurred to me that The Noun Project was the perfect symbol repository to mine for creative commons images.

Indeed, when I did my own storyboarding and a lot of custom drawings, as I did for the first visual essay, Aesthetic Diversities by Daniel Mroz it took almost 3 weeks to complete! Once the research assistants were able to specify which nouns they thought would be appropriate and provide the source, the speed of completion increased dramatically to the point where I could finish a visual essay in one day.

Previously, I’ve made whiteboard animations from scratch, using my iPad and iMovie. It would take me weeks just to complete 5minutes of video. This was not an option for this project of 13 videos ranging from 15-20 minutes each! There are many whiteboard animation tools out there but we chose VideoScribe. This software runs about $200 for a yearly licence and $600 for a lifetime.

VideoScribe requires clean vector graphics and how the lines were drawn in the graphics application affects the way it “auto” draws in the application. As such, sometimes I had to redraw a few nouns since they were grouped in ways that caused Videoscribe to draw the negative space in a confusing and not very visually pleasing way.

Adobe Illustrator was my friend this summer and it was fun to reacquaint myself with the bezier tool and zip across my keyboard with all my not-forgotten shortcuts of yesteryear. 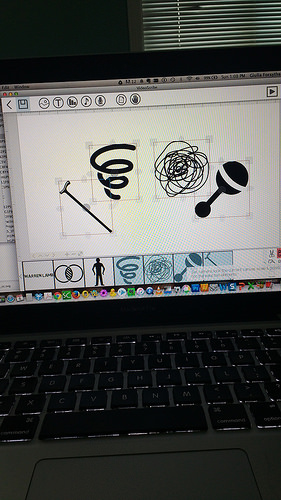 flickr photo shared by giulia.forsythe under a Creative Commons ( BY ) license

The picture above is VideoScribe running on my laptop at home. The licensed version lets you run it on multiple devices just not concurrently. While at work, I would take full advantage of my iMac + extra monitor set up – having the storyboard and essay on one monitor and VideoScribe + Illustrator on the main screen. Overall, the software was very good and much better than my manual method. There are a few things that annoy me, like the lack of ongoing time counter for more precise audio alignment and the infuriating export to YouTube method that basically requires you to babysit an hour rendering process in order to confirm the YouTube upload at the end. [Another side note, this was a rare project where I did not get sick of hearing the same sentences repeated over and over as I try and align the audio. As the artists work in the field of drama, you can be sure enunciation and emphasis is clear and entertaining. For example, Naila Keleta May, who authored two video essays on Ethnic and Cultural diversities is also a spoken word poet.]

The research assistants worked with the authors, the content and David to come up with some guiding questions, resources and references that could be used by teachers or self-directed learners.

My colleague, manager of eLearning, Matt Clare did a great job of liaising with Marketing & Communications to obtain a Brock branded site to host this material. Matt did the lion’s share of drupal massaging to get the site in a format that fit our needs by customizing the css beyond the standard template configuration.

We are in the process of completing the captioning, and MLA formatting of the essays to provide the full-text. At some point soon we will gladly provide a zip file to MTCU if they choose to host a repository or we’ll make an easy download available from our site.

All this to say, since all the material is released as Creative Commons, CC-BY, this material may be used/re-used freely and I hope it does.

I’m quite proud of it so I hope it really does help to, as David suggests, “affirm the actor to be a potent creative and political force in theatre and performance”.

One thought on “Diversities in Acting Training”