Scaffolding has been one of my favourite metaphors for teaching and learning since I learnt of Vygotsky during my psychology of child development course in second year undergrad.

Today, I briefly opened twitter to see this provocative statement:

I followed the link to read the article and I see hypothes.is has a comment from Maha, saying “Yes! Yes! Yes!”.

If you follow the tweet you’ll see a lively intellectual conversation ensue, with many valid points for and against the use of the term.

Often I am forced to confront my worldview, and this one, while I don’t cherish it dear, did shake a bit of my foundation. I thought of the many times I’ve used scaffolding as a metaphor for good teaching in many of my visual notes. None of the examples in the twitter debate used it the way I’ve imagined it. There are hanging gallows and references to stages. I have literally used actual scaffolding to get to a place that was previously out of reach. It had wheels and it moved to the place I wanted to go.

One drawing in particular, was from a Chancellor’s Chair research project by my former director, Frierian scholar, phenomenologist, and body builder, Dr. Maureen Connolly.

In her teaching and learning project, she co-taught with Dr. Gail Frost on a project called Real People, Deep Learning. 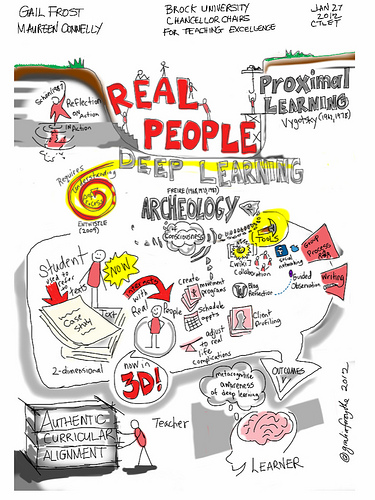 In the top right, you’ll see a reference to Vygotsky and a person standing on scaffolding being assisted to reach a new place. You will also notice there are other people taking other directions and being helped in all those ways. In the bottom left, you’ll see a note about authentic curricular alignment. The main idea of the project was to move students from flat case studies of hypothetical physical therapy patients to actually assist real people in the community. The problems students encountered were real. The outcomes, while articulated were flexible enough to allow for the multitude of variables that are possible when dealing with real people. The instructors had to provide foundational information before students could be sent out in to the community. They also had to be flexible enough to be able to find out where their learners were in order for them to assess where their patients were and where they needed to be. This was different for every student and every patient.

Yet, there was still scaffolding.

I think if I asked Maureen if she thought scaffolding was patriarchal and colonial she would agree with many in the twitter debate who said it depends how you use the term but it certainly need not be those things merely by definition.

That’s just my two cents into the #moocmooc debate.

3 thoughts on “When the scaffolding shifts under your feet”