Based on the nostalgic, romantic and slightly eerie site, Dear Photograph I went back to the scene as prompted by Martha‘s submission to DS106 Assignment bank. 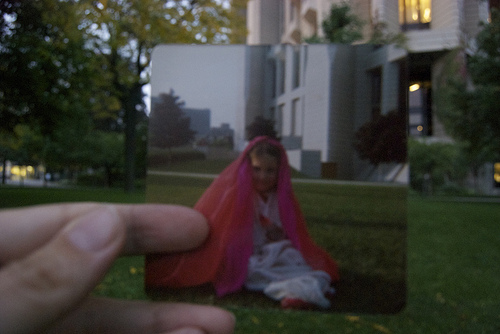 Remember playing dress up on the lawn of the University of Toronto Robarts Library? Wasn’t that fun? 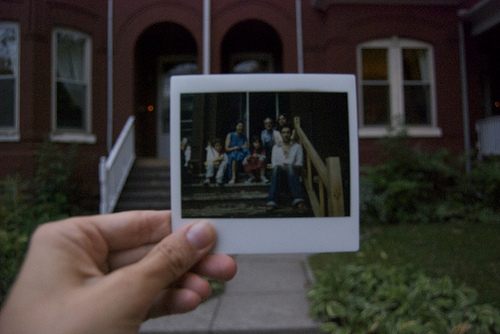 Dear Photograph,
I took you with my first camera, the day we moved away from Toronto. As an instant photograph, you started black and slowly shapes formed, yellowish at first, faces appeared, details emerged, colours burst.

The image was created just as the moment ended.

I moved with my mom to Welland. My brother moved with my dad to the UK. I can’t tell you how many times I looked at you wishing I had made the moment last longer, not realizing how far away my friends and family would soon become.

The camera was a Kodak Instant Camera. I received it as a birthday present when I turned 7 years old. Polaroid sued Kodak and they stopped making film for this camera and offered trade-ins for the defunct camera. I got the Kodak Disc. The disc was a decent kid’s camera. Easy to load and use but the negatives were so tiny the photos were very grainy.

I would long for the magical transformation and instant gratification that the instant photographs provided. It would not be for another 10 years that I would learn black and white developing and I would truly experience the magic of watching pictures develop before your very eyes.

I love this assignment. What could be better than taking photos? Take photos of photos!

Although, it was more difficult to do than I imagined. You need to be able to keep the camera at infinity focus (high aperature) or landscape mode but the light was waning and I didn’t want to use the flash. Lack of tripod & slow shutter speed explains the blurriness. I might try one or two more in better lighting conditions.