Sunday’s Daily Create was to take a picture that shows motion. I decided to make it rather show a movement. I love the celebratory, non-violent movement of this ensemble featured in The Huffington post. I’ve included the embed of the video below. It’s quite moving. I love the track titled Intuition by Astronomie. It’s en français; my fave line is “D’un même élan” (roughly translated: the same momentum).

Last week the National Post ran an op-ed from John Moore where he challenges the prominent notion from the R.O.C (Rest of Canada)

He points out, “Today’s youth face a grim future not of their own making. Is it any wonder that they’re angry about it?”

Born in Toronto, Ontario but living in Montreal, QC, my brother, Matt Forsythe has done some beautiful art work as his contribution to the Casserole.

In addition, his recent FB status update has generated a lot of discussion.

I agree. I think this argument is brief but clear and his friends are commenting in droves, not all agreeing but all being quite respectful.

Now this is really looking like a fan site for my brother, but I really have to also give credit for this stunning picture he took from a rooftop in Montreal:

=======
NOTE on making the Animated GIF: I took a screen grab of the video for about 5 seconds. The more observant of you will notice my sloppy mouse icon in the bottom left corner]

Then I Imported mov as layers into Photoshop CS5. I masked out the movement I wanted to freeze and what I wanted to move.

I applied the filter: Brush strokes-Ink Outline to the layers and exported as B&W animated GIF. 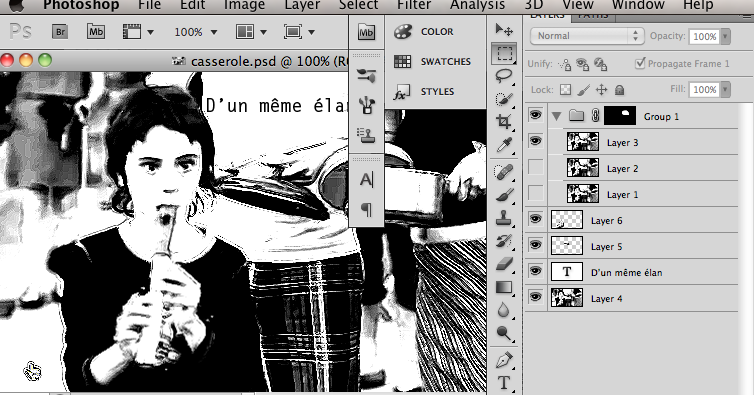