Whether you are outraged,  amused, or overwhelmed with ennui by the flurry of Instagram ToS sentiments, I agree with Gina Tripani:

I saw a few of these appear in my instagram feed:

Dear Users:
You are not our customers, you are the cattle we drive to market and auction off to the highest bidder. Enjoy your feed and keep producing the milk!

I thought it would be better to see a bit of e-motion with all those words; in honour of #GIFest, here is what I think Angry ToS panda would post to instagram:

Cows nodding, “Isn’t this great? We get all the food we want! For FREE!”

Okay, I know the metaphor is getting over used and there are already many analyses at what Instagram’s terms of service really means, from I’m Not The Product, But I Play One On The Internet to Instagram isn’t a Public Utility.

Already, the outrage has prompted Instagram to pipe their new ToS through a newspeak social media filter so it is basically the same but doesn’t sound so gross. Just like Facebook’s, of course.

Truth be told, I really just wanted to make a cool animated #GIFest based on this hilarious video @cogdog shared.

I contemplated using it to deride MOOCs, as is (apparently) my #DS106radio duty. Alas, I had originally started a post in response to the supreme abject harbinger’s inquiry: “why does anyone use instagram?”

So, why do I use Instagram? Initially, the short answer (for me) is that the app was fast and easy to use. There are elements of community that were unexpected and pleasant, but mostly it was the fastest way to go from seeing a cool thing, to getting a shot, cropping and posting to multiple locations.

The main decision boiled down to whether I wanted any kind of reuse (for myself or anyone else). If yes, I post to Flickr. If I don’t care then I use instagram. Usually, if starting in instagram, I would post to both. I would never, ever post my DSLR pics to instagram because if I have to go to all that trouble, I sure as hell am going to putting my photos somewhere useful, like Flickr.

On a rare occasion, I’ve wanted to use someone else’s instagram photo in a blog post. Even if they wanted to give me permission, sharing and reusing is  really difficult. It may even be ToS violating, though IANAL so I’m not sure. When in doubt, I do what I think I should be able to do.

Using the app “share” button, it only links to a page, not the image itself. Using the web interface, right clicks on the image are disabled. There are workarounds. What you have to do, from your instagram profile page, is find the individual picture page, then Inspect Element (chrome), find the crazy url that ends with .jpg. 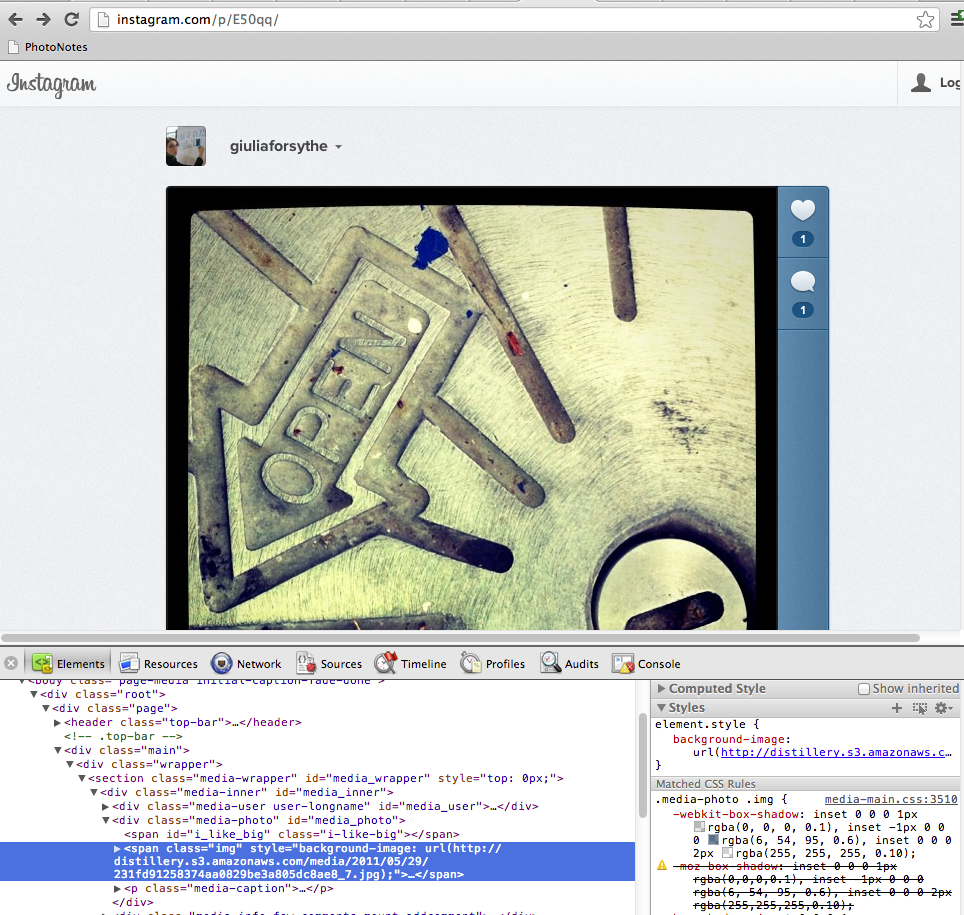 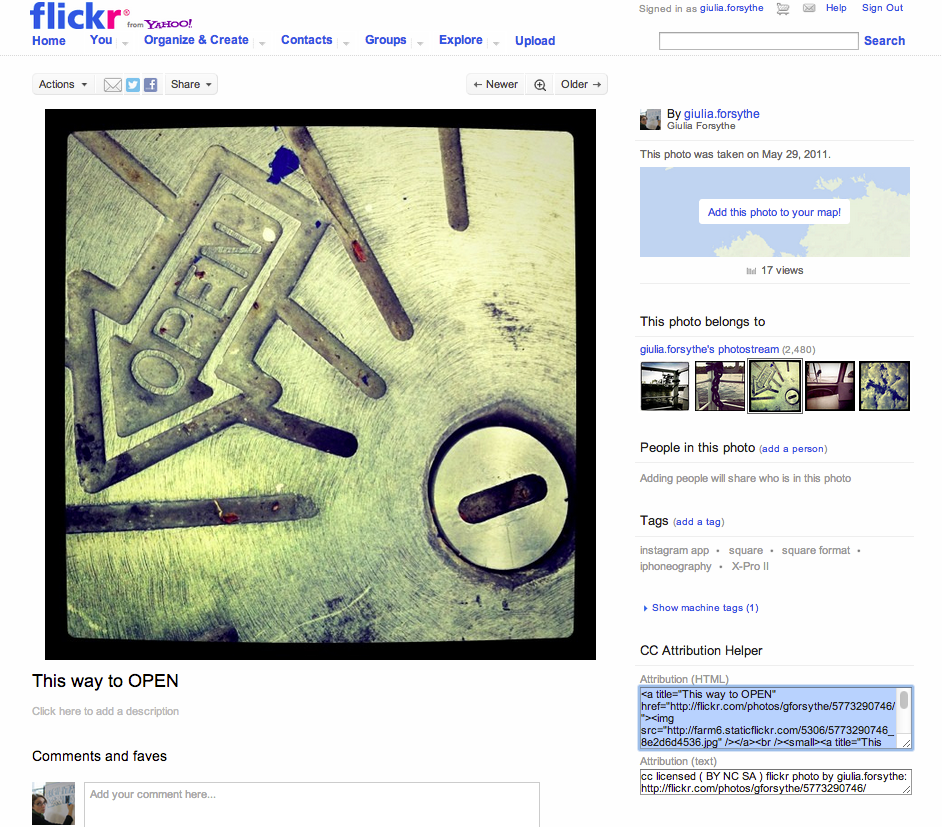 I already used Flickr’s old mobile app every day before they updated it so I’m not going to go on about how killer  the new one is, except to say, it’s efficient and does what I want.

If you need more thoughtful analyses, I suggest you read Ma’ayan Plaut’s rationale for quitting instagram from yesterday and now today, why she stands by her decision.  Now if you’re really feeling riled up,  go sign the petition to make the Flickr API a National Historic Landmark.

2 thoughts on “Open as in “for business””