I have more specific reflections on each of those events but a very interesting question arose this week that I really want to explore.

#stlhe2012 to those who live tweet – how do you capture & utilize tweets for reference & follow-up?

To which I responded:

@peterallanwolf sometimes I use tweetdoc.org to archive conference tweets #stlhe2012

Which was followed by:

@peterallanwolf Storify is one technology; I’m sure there are other SM aggregators. No doubt the #STLHE2012 Twitter crowd will step up!

This generated a bit of discussion and I thought it would be interesting to take a more detailed look at each of these options.

Starting with my suggestion to use tweetdoc, here is a
PDF archive of all #STLHE2012 tweets

This is really easy to set up and can be done at any time but ideally at the end of an event. The caveat is that it only captures 500 tweets at a time. So if there is a lot of twitter activity you will need to break apart the conference by dates. I had to create two archives and then merged the PDF files into one. This isn’t ideal and there are probably duplicate tweets overlapping the days.

So what about Storify? I’ve used storify for a few different events and really find it is best when you want to include a variety of media: tweets, flickr & instagram pictures, videos, etc. I don’t find it works as well for an entire conference or any scenario where there are more than 25 artifacts. Filtering plays a big role. Also, I’m not sure about the long term viability of using this format for archiving. It relies on multiple tools in the cloud to maintain the status quo. If my work with online courses and linking to external sites has taught me anything it is to expect things to change.

Here is a short storify I created from the closing panel which seemed to get the some of the most twitter activity for a plenary during the entire conference. This is created from the Storify site and you specify which tweets you want to use. This allows you to filter out repeated retweets and/or choose the tweet that really captured the quote the best. Selection is done manually though, so the act of curation obviously takes more time.

Student leaders speak on the future of Canadian post-secondary education

Students run the panel to close #stlhe2012. Yes!Christine Adam
Really looking forward to hearing the student voices in Montreal #STLHE2012 http://pic.twitter.com/KW5vna4WJoanne Fox
#stlhe2012 student leaders about to speak! Looking forward to hearing their voices, thoughts, and ideas!Trent Tucker
First student panel at #stlhe2012 Blind Curves or Open Roads?Veronica Carr
#stlhe2012 Student plenary: fun to hear them getting excited about things their institutions doing well. Reinforces my desire to innovate.Catherine Rawn
Inspiring vision – to translate passion for teaching and learning to community engagement. #stlhe2012Natasha Kenny
Cegeps rescue students from high school… LOL #STLHE2012Jaymie Koroluk
#stlhe2012 student leaders motivated to wake up asking, "how can I contribute today?" #stlhe2012 – to actualize their potential!Natasha Kenny
brilliant insight for life! @ProfTucker: #stlhe2012 student panel: it is not about having the right answers but asking the right questions!Natasha Kenny
#stlhe2012 Imagine if all our students "got it" like these students seem to! When I teach a class of 300+, how can I reach these students?Catherine Rawn
Model, inspire, motivate & build hope“@cdrawn: #stlhe2012 When I teach a class of 300+, how can I reach these students?"Natasha Kenny
Teach towards engaged and informed citizens, inspire curiosity, explore core truths, encourage reflection, generate meaning #STLHE2012Joanne Fox
#stlhe2012 Alexandre: PSE gives you the "shoes" for the rest of life’s journey…Trent Tucker
According to student leader: those who don’t fail in higher ed didn’t try hard enough (or party enough) #stlhe2012Megan Fitzgibbons
Beautifully elegant – Those who did not fail, did not try hard enough – we need to inspire failure in order to succeed – #stlhe2012Natasha Kenny
These students are AWESOME #STLHE2012 Asked for audience participation and says, "I know you hate it when students don’t put up their handsJoanne Fox
These students are brilliant! Emphasize the importance of metacognitive learning within the curriculum #stlhe2012Natasha Kenny
#stlhe2012 "it is better done than said" — Selena on experiential learningTrent Tucker
#stlhe2012 Johanna on the future of PSE: "nurture critical thinking"Trent Tucker
Johanna (articulate student!): one goal of academic enterprise should be to question the status quo and hegemonic structures #stlhe2012Megan Fitzgibbons
#stlhe2012 student suggests CSL and prof who uses old reading list just says yes. Sweet fantasy. Love itBilly Strean
Student mental health on the agenda at #stlhe2012 student panel. Thank you, Mimi! #destigmatize http://bit.ly/PIBflZChristine Adam
If you think education is expensive just try ignorance. student voices heard #STLHE2012Joanne Fox
Tell your students to bring their hearts to class, not just their brains #stlhe2012Natasha Kenny
Wonderful to hear fluently bilingual students. #STLHE2012 Sorel
Always impressed by how articulate and vibrant 3M student fellows are #STLHE2012Jaymie Koroluk
Hearing from students was the perfect way to end the conference. Thank you for the honesty and challenge of your words. #stlhe2012veebs
Student panel = fantastic way to end the #stlhe2012 conference. Agree that more students should be in on the conversation!EDC

Similarly, you’ll notice that I’ve embedded tweets into this post using twitter’s new built-in embed tool, which is easier than the now-defunct web app called Blackbird Pie. There is still a Blackbird pie wordpress plugin but I don’t see any advantage using the plugin over the built-in tool. 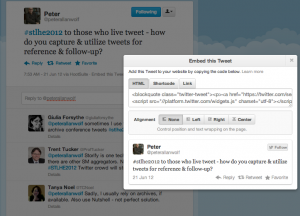 I guess my main concern is the lack of control you have over that content. You are only linking to it and if the owner deletes the tweet or twitter comes up with some Murdoch monetizing scheme and changes our access or terms, then we will no longer have the content at all.

But it sure does look pretty and it is very functional while it still works.

That brings us to wonder about If This Then That, the magical-do-anything-you-can-think-of with just about any tool that has an API.

I browsed through existing recipes and not surprisingly, someone has set up the simple template to capture tweets with a particular hash tag into Evernote. 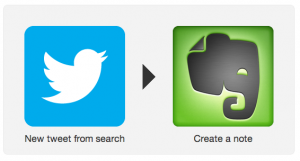 Authorize both your twitter account and your Evernote account, set up your own parameters and you are set to go. The only trouble is that it doesn’t seem to be able to capture tweets from the past.

Since I started this experiment after the end of STLHE, it’s fairly useless in capturing anything about that conference after the fact.

But with 20,000 K-12 educators descending on San Diego right now for National Educational Computing Conference ISTE12 I have a very active hash tag to experiment with, which will definitely be a test of the robustness of this application.

As suggested in the recipe, I created a public #ISTE12 notebook in Evernote. There were other options for archiving, including avatar, which might make the notebook more visually stimulating but I’m going for simplicity first time out. The sheer volume of tweets may cause some kind of complications but let’s push this to the boundaries, right?

So far after 12 hours there have been 566 tweets. But the conference hasn’t actually started yet so we’ll see what happens after a few days.

What are your thoughts? Any other tools you use for archiving all the wonderful things said and done at conferences? How does this aid your reflection (if at all)?