Otherwise known as “What would Spinal Tap call the Web Today?

Week 9: Web Story Assignment where I go Meta. It’s a web story about the web. 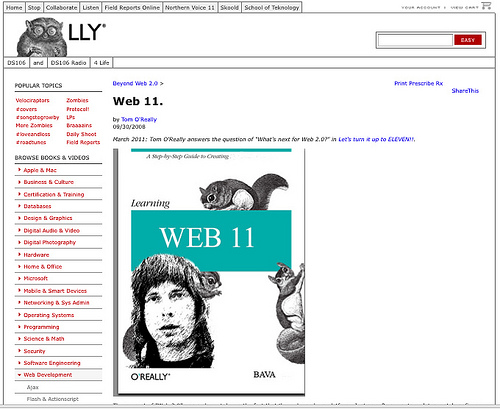 Excerpt from O’Really web page, above:

The concept of “Web 2.0” was a clever take on the fact that the web can be a platform. Just as software gets updates, patches, fixes, enhancements, so does the web. In the early days of the web, things were simple. There was one browser. You could view source, edit it in notepad. Play with hexcodes to change simple colours. Canadians were forced to spell colours as COLOR= (otherwise the HTML wouldn’t work)- but even so, life was good.

Well, of course then came along the so-called democratization of the web. We made tools to make tools to make it easier to share content. We shared content with each other and other tools. We called those mashups. O’Reilly called it Web 2.0. Malcolm Gladwell said that name was sticky and so it stuck. Everything was labelled Web 2.0.

Alas, the only constant is change and new revisions of this platform evolve daily. The web became more open and closed simultaneously with the advent of open source/creative commons initiatives at the same time as sexy, irresistible locked down devices like the iPhone and iPad. What does one NAME this new platform? Narrow minded folk assume that adding +1 is the obvious solution. Call it Web 3.0, they said.

But no, I contend, we must ask ourselves- WWSTD? (What would Spinal Tap do?) I’ll tell you what. They would turn it up to ELEVEN. I do not think it is a coincidence that the year is 2011 and we are grappling with what version number to give to the Web.

So, in this new connected-learning era of the web; beyond a marketing opportunity; beyond the collective hive mind; beyond drive-by anonymity or shallow thinkers; beyond all the criticism- there is an opportunity to turn up the Web to ELEVEN (best said out loud with outlandish Brit accent)

NOTE: I edited this file mostly using Firebug as per Martha’s tutorial but kept a TextEdit plain text file open at all times for the saving and finding/replacing. I uploaded it to my server but can’t get the style to work on my local site, no doubt due to some O’Reilly server-side stuff going on. Further to my point about much more complex this Web 11 stuff is. The host website generates HTML from a *.pl. which I believe is Perl. In some parallel universe I might have the time to make it work.

2nd NOTE: I started hacking at this on Sunday March 20. On Tuesday March 22, O’Reilly ran a special for 50% off e-books with proceeds going to help Japanese Quake Victims. Since I had already hacked all the links to go to my site- I figured the least I could do was buy a book. I purchased “Learning PHP-MySQL-JavaScript”. (Much more interesting than PERL).

First project: Smash Minecraft into Moodle and give it a clever name.

One thought on “You see? This web, it goes to Eleven!”