UPDATE  01/18/19: This post has been linked from Canadaland blog and I’m so honoured. I’m tidying up some of the off-topic rants to be more to the point.

Usually I have a great ability to ignore ads. I’ve been too lazy (negligent) to use ad blockers because I just skip pas the ads. But this one in particular had such a weird vibe to it. Why would Facebook think I would want to see a Justin Trudeau with red eyes crying? Does it think I’m a bleeding heart liberal? Or that I hate bleeding heart liberals. I know I’ve confused its algorithm by messing with my political alliances by signing up for a political party I have zero affiliation with just so I could vote for a reasonable leader. Ever since I “strategically” joined the conservative party, I randomly get weird conservative targeted ads¹. My membership has since lapsed and I’m not sure what Facebook thinks my political alliance stands.

Anyway! This ad popped up in my Facebook and I’m not sure why. 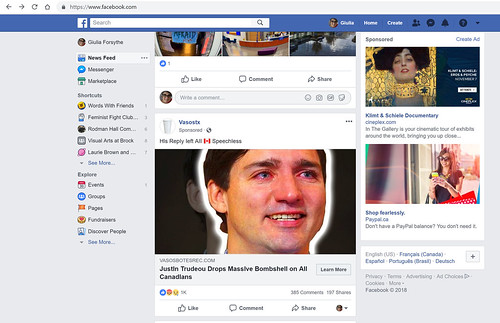 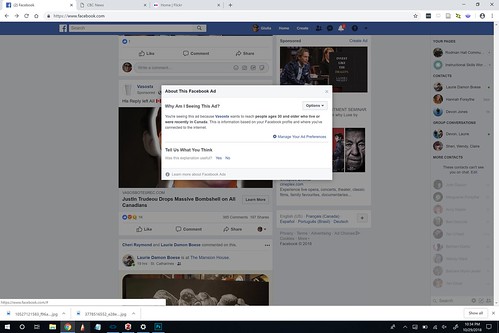 Oh, because I’m over 30 and I live in Canada. Have any of my Canadian over-30 friends seen this ad? Somehow I doubt it.

The ad is sponsored by this page: 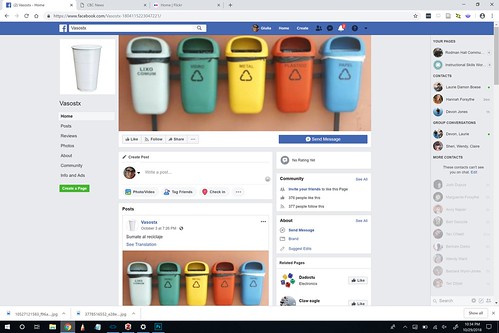 No big deal, right? Just some junk? Well guess where the link goes? TO THIS PAGE: 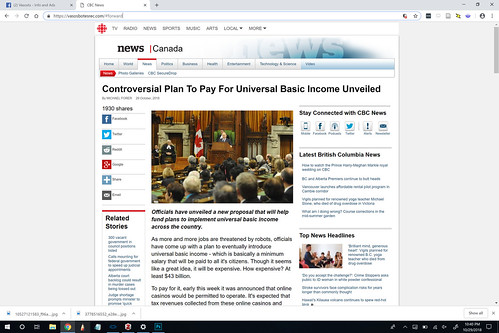 This looks like our national public broadcaster website, the CBC. But if you look at the URL, it’s actually a spoofed page.

The news is definitely fake. It’s also a double scam. If I were really a conservative, it would boil my blood that the federal Liberal government decided to implement a Universal Basic Income Supplement. This was something my provincial Liberal Ontario government was going to pilot before the June election and then when the provincial conservative government took over, they immediately cancelled. Further to that, every link on the page goes to an online casino. Here’s the full text baloney of the article.

Officials have unveiled a new proposal that will help fund plans to implement universal basic income across the country.

As more and more jobs are threatened by robots, officials have come up with a plan to eventually introduce universal basic income – which is basically a minimum salary that will be paid to all it’s citizens. Though it seems like a great idea, it will be expensive. How expensive? At least $43 billion.

To pay for it, early this week it was announced that online casinos would be permitted to operate. It’s expected that tax revenues collected from these online casinos and those from marijuana will be enough to pay for its plans to implement universal basic income.

“We have decided to permit online gambling and allow a few licensed and regulated casinos who have been determined to be legitimate and real. The taxation structure will be similar to how existing lottery systems operate, except this will be on a bigger level.”

When questioned as to what would happen with tax revenues in the meantime, they said “these tax revenues will go towards funding various pension plans, and later, these two will be replaced with a universal income system.”

After the announcement was made, it was said that only a few online casinos are permitted to operate in the country, with Rizk Casino receiving the first license “because they helped draft legislation, and have been reviewed and examined to be fully compliant and legitimate.”

When an online casino or any type of new industry enters a country, they sometimes offer promotions and bonuses to attract players to get their name out. As expected, Rizk Casino is offering limited-time bonuses, promotions, and has adjusted payout odds to heavily be in the players favor. Simply put, playing now will almost certainly guarantee winnings and big payouts.

From a business standpoint it may not make sense that they are just giving away money, but for Rizk Casino, since they are the only ones for the time being, it will allow them to develop a reputation for being a good casino right from the start. Over time the payout odds will be adjusted, but for now, you would be crazy not to play, as it is impossible to lose.

To prove it, CBC’s Michael Forer tested Rizk Casino’s offer after the press conference. Signing up was simple, and he deposited $20, and was already winning as he got $20 right away, just for signing up. He also got 120 free spins, after 32 spins, he won $4,000. David later withdrew his winnings which was easy as signing up was, and had $4,000 right into his bank account the next day.

Michael Forer from CBC News tested and proved that the offer is worthwhile.

You don’t have to be lucky to win, take advantage of the boosted payouts, free cash bonuses, and guaranteed winnings! Follow the steps below to grab a few thousands dollar from Rizk Casino Casino now. Hurry, the offer is limited and the promotion of free bonus ends on 30 October, 2018, 2018 !

Readers should note that the legislation is identified as Cannabis not “Marijuana” beyond the other really obvious scam indicators. What I can’t tell is if this is just a scam to get me to play at an online casino or if it’s to enrage me about this Liberal government. Maybe it’s malware? All of the above? It’s totally dumb.

Normally, I would scoff and ignore this but we live in a post-Trump world where stupidity knows no bounds. Ontario recently proving this as we just elected the crack-smoking mayor’s brother, a high school drop out, failed businessman as our premier. Poor Alec Couros had to create an entire Romance SCAM website dedicated to informing women to not fall in love with his photograph and some illiterate Facebook messages.

I reported the ad to Facebook as a scam and I also reported to CBC. But really, what else can be done? Post on Facebook? I’m not sure it’s my network that would be affected by this? So my gosh, despite having a bazillion things to do, I’m blogging it as documentation, as so many of my very well respected colleagues have done. Thank you, Mike Caulfield in particular for all your work in this area.

I hope I’m just over reacting but in light of the populist, nationalist shift in the global political landscape there’s a lot as stake.

¹Redacted rant: The days of hoping for a ridiculous leader in hopes that *your* political party seems more palatable are gone. There is no comfort in knowing that a selfish party has an absurd leader. Specifically, I’m talking about what we’ve seen happen in the US (and my god, the world recently). When I joined the Conservative Party it was to prevent Kevin Shark Tank O’Leary (idiot and asshole) from becoming the leader of the party. I’m not sure my vote made a difference but the experience has been very interesting. First off, I should confess, I would NEVER, EVER vote conservative in any election: provincial or federal. But the rules for joining the party are not that I MUST vote conservative. You’d actually be shocked to read what you do have to agree with to join the conservative party. It’s downright reasonable and I’m not sure how any actual real life conservatives can sign the agreement of principles and still continue with their ways. Respect, diversity, the environment are all held dear. I digress.