I’ve always loved drawing, scribbling, doodling, taking notes and making meaning through visual representation. I recently reacquainted myself with my watercolour set and started painting again. In the beginning, around the holidays, I was using it just for greeting cards and later to represent images that I couldn’t find online. 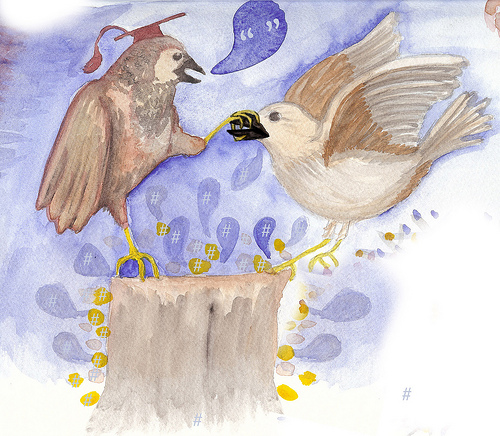 Specifically for my Harbourside Hangout presentation at CNIE with Kyle Mackie, I was looking for a bunch of images that represented the voices of dissent about twitter: it’s narcissistic, self indulgent; it could cause academics to lose control of the conversation. I was lucky enough to have a few face to face conversations with Alec Couros. Having seen his Flickr stream I had asked about the illustrations. I was particularly struck with the ripping through the tools graphic. It resonated with me because it spoke to our consumerist society, even with *free* items as we are constantly jumping from one tool to the next, in search of the next best thing, without pause for reflection, much like kids on Christmas morning. He told me he drew it and it became clear: if you can’t find the image, make the image. It seems so simple but it honestly seemed too time consuming. As soon as I returned from CNIE, I set down to paint those pictures, old fashion style, watercolour and paint brushes.

I recently tweeted the academia pic while following Mark Greenfield‘s Penn State presentation: Social Media Summit II – Higher Ed, Social Media and the Law.  From that, my Twitter friend and fellow Sakai-phile from Oregon Randy Thornton suggested I check out Nancy White and my conference & twitter friend from Northern B.C., Grant Potter suggested I check out Rachel Smith. I was absolutely blown away.

The first most interesting thing to me was to find out that there is even such a thing as ‘graphic facilitation’ and there’s even a site for International Visual Practitioners. This excites me beyond belief. A lot of my facilitation during the Instructional Skills Workshops deals with quickly capturing the moment of feedback from a group of peer learners and representing it back to the peer teacher. ISWs are the single most important teaching professional development for anyone responsible for communicating information to another person; they are both exhausting and immensely rewarding. I welcome with open arms any tool or process or that could enhance my ability to be a more effective ISW faciliator.

I have tried with some success to use graphics during the ISW but I would really love to do this in more systematic, organized way. I did try taking notes using LiveScribe pen for a computer science prof, with limited success. I do also think there is enormous potential for this in education, particularly for visual learners in distance education.

One of the many other people I enthusiastically shared these resources with was my fellow ISW facilitator, mentor, and supervisor. She had just returned from Naramata Spring Institute and had a session on this! Oh, the synchronicity! She is also excited for its potential in education. Now I’m grappling with the paper vs technology debate. I have a tactile affinity for paper and markers but never know what to do with it all in the end. Seeing Rachel Smith’s iPad visual notes are alluring enough to draw me to the dark side and throw away all the reasons I posted why I would never have an iPad. Apparently there is research on how much paper is needed for a particular amount of time. I’m going to have to try both and decide for myself. I look forward to my future meaning-making via graphic facilitation.

Finally, on a meta level, this is fascinating example of how powerful these networks can be, in particular, the vainglorious twitter. It is a convergence of interests purely because we share similar interests. In the past, our circles probably would never have intersected due to geographic, personal and temporal variations. With a tool as brief and unimposing as twitter we increase our chance encounters and are able to share interesting tidbits of the worlds we inhabit without imposing ourselves in any overwhelming way. The results are fascinating.

One thought on “Graphic Facilitator”