May 13-16 I visited the lovely Thompson Rivers University campus in Kamloops, British Columbia for the Canadian Network for Innovation in Education conference. The theme was confluence, which draws on the unique geography of Kamloops, situated at the confluence of the North and South Thompson Rivers.

The concept of water meeting was mimetic through many presentations….from puddle jumping with Nancy White 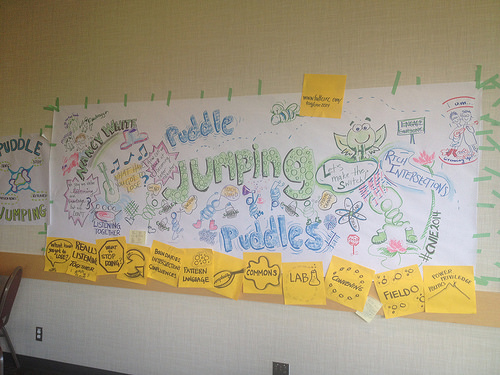 to learning ecologies with Albert Sangra. 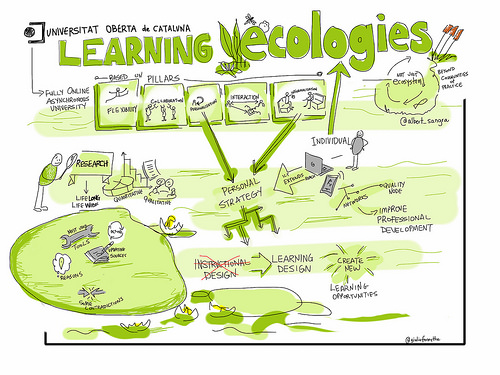 Thinking about complex ecologies and estuaries rather than simple communities. Definitely helping to frame many things for me. #CNIE2014

Using nature as a metaphor for higher education learning environments feels extremely relevant, as the planet’s ecosystems are being degraded through rapid technological “progress”. There was definitely a confluence of ideas, starting with day 1 keynote, Audrey Watters who encouraged us to look at the histories, definitions and driving forces in her talk “Against Innovation“. 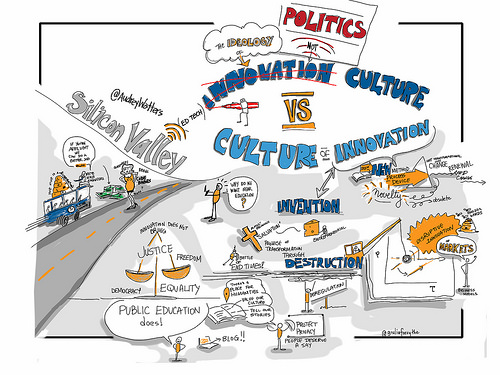 (Live drawing this talk kept us on our toes! Audrey provided us an excellent improvisational challenge; the title of the talk changed 4 times throughout her session, as she describes her evolution of thinking about innovation and education) 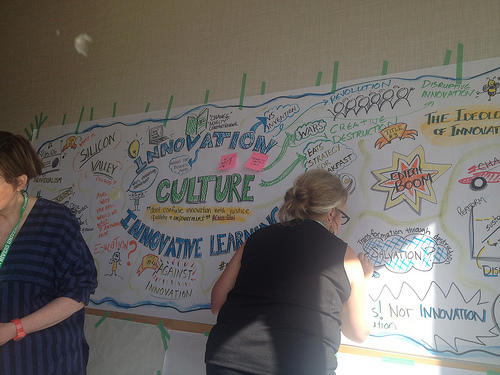 Similarly, Brian Lamb also challenged notions of “innovations” as a change for good. It was doubly sweet that Jason Toal, as DJ, lay down a kick ass musical bed punctuated with sonic insights perfectly aligned with the sentiment of Brian’s talk. 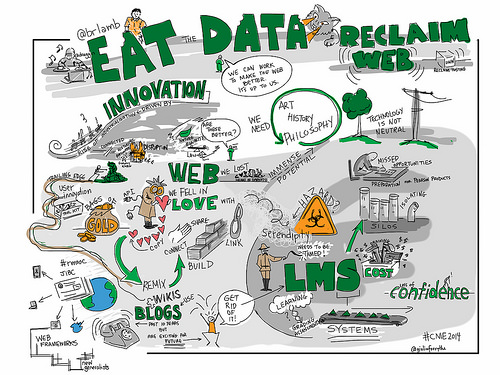 The rise of industrialization has typically driven innovation which has done some devastating things to nature, law, equity, justice. Remember the web we fell in love with? The web we lost? There came a moment when serendipity became something we had to tame, something from heart of darkness. A hazard. Brian made 5 arguments about the LMS – THE SYSTEM IS not about learning it’s about management, grading, assessment: 1. Technology is not neutral. 2. Missed opportunities. 3. Silos 4. Draining cost. 5. Loss of Confidence. GET RID OF IT!

The web is filled with Gardner Campbell‘s bags of gold, a place we could copy, connect, build, share, link.
USE BLOGS & WIKIS, D’Arcy called from 2004 reminding Brian that he’s been ranting about this for over 10 years. Even so, we’ve never really given blogs and wikis a chance. There’s a great potential to do some amazing things in the open, with user innovation toolkits. We can make the web better. It’s up to us.

This is well articulated by Tannis Morgan, who presented on The Places, Spaces and Cultures of Applied Learning:

We would rather spend millions on low risk, yet low satisfaction (for the most part) vendor products than create tools that address our teaching and learning contexts and share them across the province. We view open tools as risky and resource intensive, yet we have entire teams dedicated to enhancing the LMS experience for students.

I also appreciated the concept of appropriation, used by Ken Simpson in his Utopian Literature course, with the support of the director of innovation, Brian Lamb. The appropriation art movement of the early 20th century took found objects, transformed them and re-contextualized them. Using this notion for artefacts of the web, students appropriated digital media and remixed them to create new meaning within their cultural context as a form of digital storytelling. This was all created on the open web, using WordPress so the outputs of their learning extend beyond a 12 week course and can live on after the end of term. It also provided an excellent opportunity to reinforce concepts of user rights, copyright law, fair dealing and transformative works. 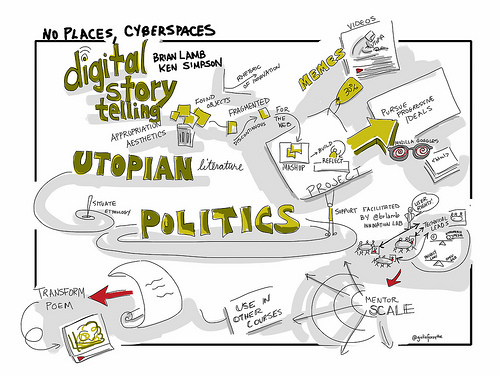 Speaking of open, I also went to a session from TRU Open Learning Irwin DeVries and Gail Marong as they talked about Open Online Course development for the OERu consortium. The first questions at these sessions always, begin with “what’s your business model?” or “How do you make money?” followed by “how much of your time did it take?”. These were answered with “we don’t make money, we do it because it’s our moral imperative to share learning” and “it takes a lot of time, we did it after hours and above and beyond our regular workload”. This is commendable but a real challenge as a strategy when trying to convince senior admin to iterate towards openness. 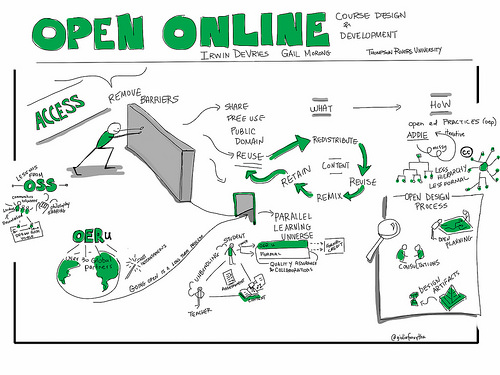 I know that there are compelling business case arguments but these are higher level discussions. At the LEARNING design (a term Albert Sangria suggests we move to) level we should be focussed on improving the environment for learning and not worrying about the gate-keeping. I’m with Gale and Irwin on that side of the debate but I recognize it’s a tough sell to those with budget deficits.

I always appreciate the insights of Laurie Harrison, director of online learning strategies from University of Toronto because she is able to hold the fiscal realities and open ideals in balance, without shortchanging one aspect or the other, a skilful act she calls bootstrapping. In Laurie’s definition, she leverages the ongoing activities using a knowledge mobilization framework by brokering roles (Cooper, 2011). I particularly liked the sartorial aspects because I was able to draw funky boots AND a nice dress. 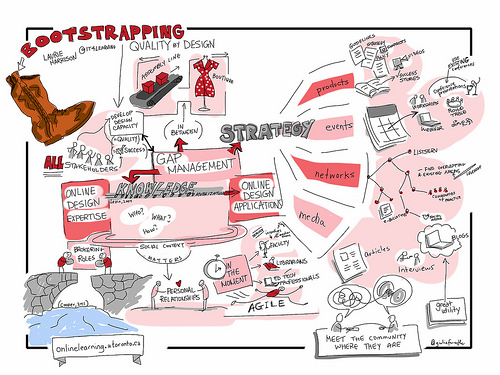 D’Arcy Norman did an incredible hands-on session about campus engagement, which ostensibly was about the LMS procurement process but can be applied to any issue requiring stakeholder input. Extra gold stars for his fishbone graphical template.

Eva Malisius presented with a skyped-in Amanda Coolidge on the use of video to replace the essay in a masters level Conflict Analysis & Management course. They showed some student exemplars and had an activity for the group to discuss assessment. At first I was too distracted by how well they were able to get Mozilla Popcorn Maker to cooperate as I had recently convinced a Communications professor to use this tool for a 2nd year new media course, with lacklustre results. As a concept, I adore the tool and I was able to make some fun stuff but the students had a lot of difficulties. Soon after, we learned that they wisely opened up the assignment to include all types of video and that was why they were able to get better results. Locking anything to one device, one type of hardware, disallowing choice is basically the kiss of death for new media assignments. 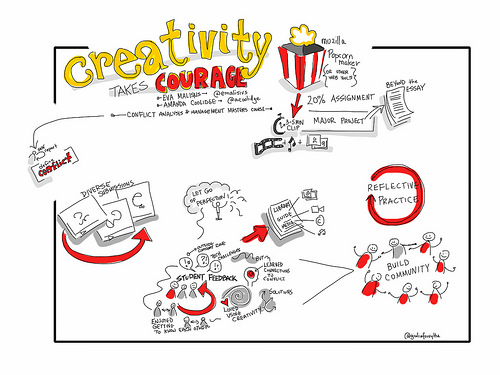 Also of interest, was Luis Guadaramma’s work in a 3rd year Human Geography course. The course is completely asynchronous with continuous registration which has made any kind of cooperative learning very challenging, if not impossible. 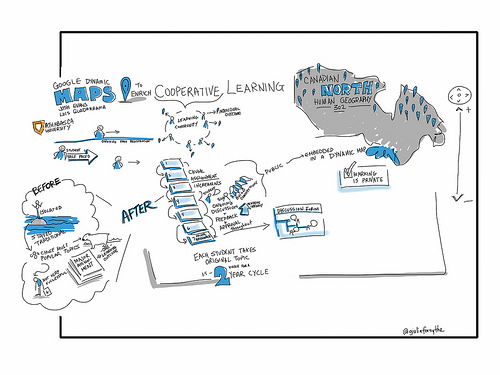 Our ed tech crew, specifically Mike Brousseau (I call him the LTI Baron) has been playing around with the Google API to integrate via LTI into our LMS for a Culture of Noise course running this spring. (He’s posted his work on GitHub) Essentially the student’s name is automatically loaded, so they don’t need to have a google account and it avoids random names or anonymous entries. 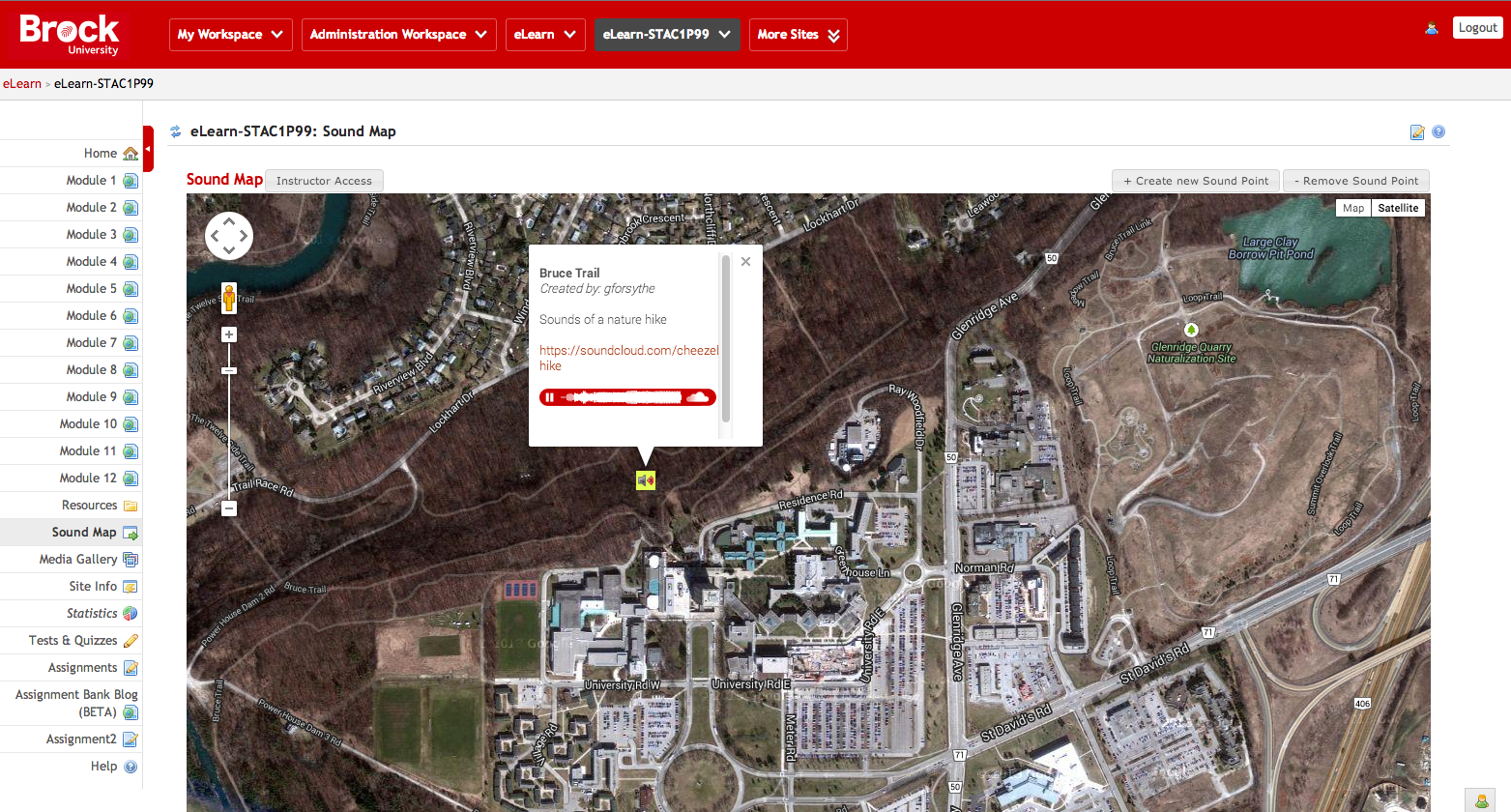 We are also working on a Human Geography course as part of the Ontario Online Inititative with a similar assignment, but using MediaWiki instead of Google Maps. I think our approach might be more manageable with regard to scale as it requires collaboration instead of cooperation. A distinction made by Terry Anderson when presented his work with Jon Dron, Media is the Pedagogy examining the topology of social forms in learning environments. I will need to dig deeper into the resources in his slides 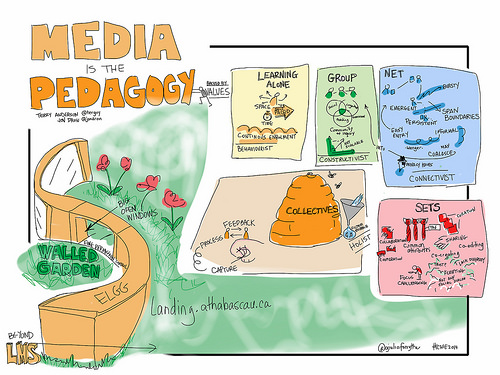 Last and probably least, I went to a session about play testing which given Tannis’ recommendations for the Unwinnable game session by the same presenter, I had high hopes in using industry-style gaming research to analyze engagement for online learning. I think Katrin Becker is onto something here but missed the mark when it came to operational definitions. There was an inherent conflict between recognizing there is a gap in describing a game or activity as being “fun” and failing to define the metrics of “fun”. Tannis made an excellent point that she learnt from Katrin’s earlier session about unwinnable games, in that sometimes things are not fun. Doing a life saving simulation in Darfur can be challenging, rewarding, stimulating, engaging, meaningful but not fun. Learning in itself, is not always supposed to be “fun” all the time. 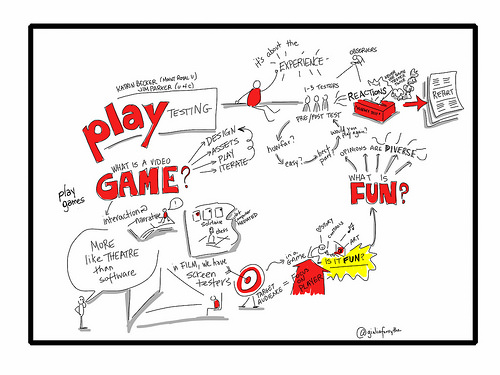 That said, I appreciate how this session sits at the edges of traditional scholarship. Some of our best ideas intersect with other disciplines outside of the norm and there is absolutely value at approaching online learning from an experiential perspective. As I learned from Keira and Zack, the most fertile spaces exist on the edges.

This was reinforced metaphorically throughout these sessions and the conference as a whole. My plan was to create one giant ecosystem visual note to incorporate all the elements of my time at CNIE but alas, time ticks on. In the meantime, this analog airplane scribble will have to suffice: 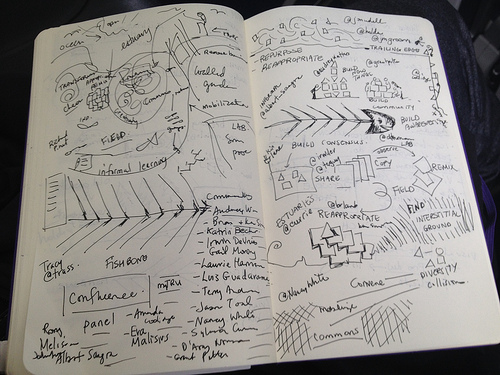 creative commons licensed ( BY-NC-SA ) flickr photo shared by giulia.forsythe Note the many references to Nancy White’s keynote, describing the stratification between the field and the lab, where overlaps exist in the commons through the process of convening. [Also need to do a deeper dive on this – it deserves its own post]