Last night I stayed up incredibly late. Combed over the Change MOOC threads. Analyzed my opinion about comments on the main site vs my blog. Signed up to help with the eBook project. Listened to DS106Radio. Y’know a usual Friday night.

Around 5am I drifted off to sleep as I think I hear It’s…Later…Than…You…Think was playing. I don’t remember any of the episode. 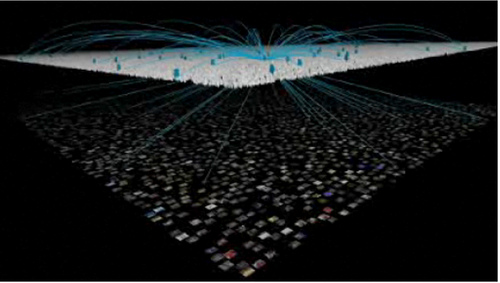 But I had the oddest dream

I was sitting with all the listeners from across Canada (BC, ON) and the world (NZ, USA, UK, AU, JA)

they were
beautiful and slightly grotesque mashed up beasts
straight from mythology
Miyazaki’s Totoro inspired,
or something from Spirited Away
impossibly combined
hirsuit insect dinosaurs
grasshopper legged yeti

and all the listeners sat physically in this filtered sandbox
were
elevated,
but trapped
with giant brick walls around us
we were in a box
though we didn’t notice
because we were
having fascinating conversations
but people from the outside the giant walls
below our huge sieve box
in the rest of the world
had no idea what was going on
and it was impossible to describe the beasts of the conversations properly
and the outsiders couldn’t see the beasts
so they were just mythical

soon enough,
interestingly,
outside the box
the beasts rose in popularity
out of context
not as pieces of conversation
rather, instead, as products on shelves
children had them as beloved stuff toys
stickers
colouring books
there were handcrafted interpretations for sale on etsy

17 thoughts on “Filtering for Bags of Gold”