In Doctorow’s novel Pirate Cinema, the main character is obsessively driven to create and transform a video “mashup from something trite and obvious to something genuinely moving”.

It’s a great complement to this week’s ds106 remix challenge.

Jonathan Worth, the brilliant prof behind #phonar, has released all his great Cory Doctorow photographs under a creative commons license for all the world to remix. Cogdog has already given Cory the Jedi Master treatment.

I decided to choose this picture: 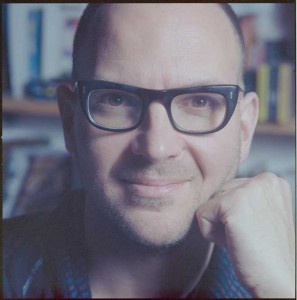 I stared at it so long I thought I could almost see Cory blink. The way his face leans on his hand reminded me of the scene from Indiana Jones when the adoring student blinks slowly to reveal ‘LOVE YOU’ written on her eyelids.

I always loved the way the nervous professor Indiana Jones stopped suddenly to look at the girl’s eyelids.

I wonder if he’d look the same at Cory?

While it’s not exactly the kind of moving mashup* Trent from Pirate Cinema has in mind, it does make me chuckle.

Professor does a double take

Technical stuffs:
I downloaded a spanish version of the Prof Indiana teaching scene using pwnyoutube, clipped the eyelid scene in MPEG Streamclip, exported as mov, then imported frames as layers in Photoshop. I put the Indiana frame layers in a masked folder so that the only movement would happen in the eye area and then added Cory as a layer below.
While Jonathan’s photography is beautiful, the colours were so different between the photo and the film so I modified the skin coloration by adjusting the levels, hue and saturation. There’s still a huge colour difference between the eyes and Cory’s face but I think it adds to the absurdity.

*Also, I realize there’s some deeper discussions about the difference between Remix and Mashup but I’m lazy and I’m going to use them interchangeably.