I have a renewed sense of vigour about injustice, irony and absurdity after being recharged from the electric energy emanating out of Utah and the OpenEd conference.

The Twitterz and The Blogs are lit up with chatter about Jim Groom’s OccupyOpenEd keynote. It has gotten people talking and that in itself makes it a success.

While Jim’s keynote was awesome, in truth, I’ve heard it already or lived it really, since I’ve been deep in the fray of ds106 fanaticism for a few months now. He was preaching to choir and I was singing Hallelujah loud and clear. Heck I even created a whole sock puppet identity to take the Summer of Oblivion.

So, to shift onto other new things that had me rethinking and re-examining and something that really reinvigorated me was Brian Lamb’s session : Towards Open Sustainability Education 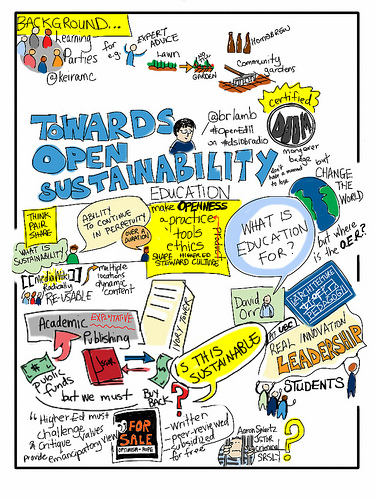 I didn’t quite realize how much I had absorbed, until -fast forward- to our institution’s most recent copyright workshop, co-hosted by our teaching centre and the library. Let me set the stage: Imagine a room filled with 50 slightly irate faculty who are frustrated about what Access Copyright and changing legislation will mean for their teaching. They were mad as hell and wanted to vent that anger.

Etched into my mind through my chaotic visual notes while listening to a stream of #ds106radio a bit of Brian’s session took a new shape of its own, in my own words (slightly embellished, perhaps mutilated but nonetheless inspired).

We are a publicly funded institution. Our government collects taxes and funds the university and granting agencies so that we can further our body of knowledge, so that we can have a competitive world class knowledge economy. What good can we do if we lock all this knowledge up behind paywalls? How are we solving the world’s problems? How are we being thought leaders?

I am glad you are angry. You should be. But you shouldn’t be angry at the library or administration.

Then I asked everyone to recognize their own agency for change. This doesn’t need to be something that happens to us. We can actively work to change things because this is bigger than us. This is bigger than just our institution.

Across Canada, universities are dealing with the exact same problems. The entire world is struggling with these issues. Last week, academics around the world participated in Open Access Week.

Turn your anger into action: I urge you to show your support for AUCC, CAUT, CLA. Write your member of parliament. And- if you have the option to contribute in an open access journal, pledge it so! There are also an expansive ever growing list of work to choose from, that has been released as open access.

I even slipped in a couple snide comments about Aaron Swartz.

Okay, I kind of glanced over the sustainability part during the rant, but it’s not that hard to see that the practices of academic publishing are exploitative and do not contribute to a sustainable model of knowledge growth.

Sometimes I get scolded for speaking out of turn. I mean it wasn’t my session, I was a guest, supposed to be there for support. Well I didn’t get scolded and a few people came up to me afterwards and thanked me.

So in turn, thanks OpenEd and especially Brian Lamb for stirring up my outrage again.